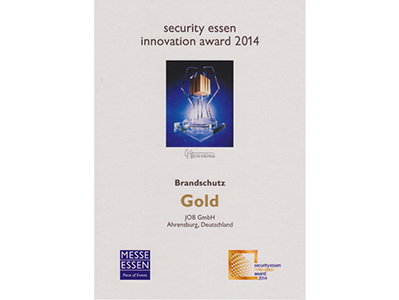 Within the framework of the opening ceremony in the evening before the fair, Messe Essen honoured particularly pioneering developments with the security innovation award.The Gold award went to JOB GmbH and its innovation, the E-Bulb ( Extinguishing Bulb).95 applications of the categories announced were received and a  twelve-strong expert jury under the proven leadership of Hermann Feuerlein (longstanding Vice-Chairman and Honorary Member of Bundesverband unabhängiger deutscher Sicherheitsberater und Ingenieure e.V. - BdSI - "Federal Association of Independent German Security Consultants and Engineers") assessed the submissions in matters relating to innovation contents, exclusivity characteristics and user benefits. In the evening before the fair, the winners were distinguished within the framework of the opening ceremony for Security Essen and Rudi Cerne as host presenting the award to Bodo Müller, General Manager and CEO of the Job Group.Bodo Müller was more than pleased, to be Gold Winner of the “Security Award”, presenting their innovative E-Bulb in front of the trade public at the global fair, as a future trend in technology of Sprinkler Bulbs. Being awarded, was the icing on the cake, attending at the exhibition. But without the tremendous effort of every single employee, continuously developing future trends sans discouragement, innovations such as the E-Bulb wouldn`t be possible at all.Thermally activated glass bulbs are billion-times successfully installed in the Sprinkler Industry for the protection of life and property.The E-Bulb is a future trend of these technologies. The internationally protected E-bulb is already filled with the non-conductive, non-toxic extinguishing liquid. When the glass bulb bursts at a defined ambient temperature, the extinguishing liquid will automatically be released. The extinguishing liquid immediately convert into a gaseous condition. As result of cooling and partially of oxygen, the fire will be extinguished within seconds. To prevent reoccurrence of the fire, the power supply will be interrupted simultaneously.